Why Educational Tools Need to Evolve

This page is a sub-section of the Games in Education series; to visit the main page, please click here. All referenced games are listed in the Games Archive.
If you haven't watched the video above, I definitely recommend it. Dr. Ken Robinson does an excellent job of highlighting the difficulties of our unchanging structure of education. While I would not say that school discourages creativity, it might stifle it or fail to promote it. However, in addiction to this, I want to talk about digital natives. 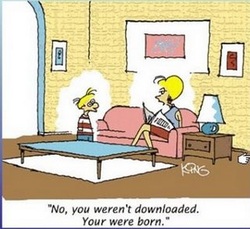 Digital natives, a term coined by Mark Prensky in 2001, refers to the generation that has grown up completely submersed in digital media: tablets, smart phones, Twitter, Facebook, and extremely immersive, photo-realistic games. Digital natives absorb multiple sources of information, quickly and simultaneously. They not only use technology to assist them in everyday life, but it has become part of the way they express and define their lives. Multi-tasking is a way of life for these kids - that is, they will be downloading music, updating Twitter, chatting on Facebook, watching TV and playing a game all at the same time. They are almost running a small empire.

In 2007 Pew Research Center found that “of the 93 percent of 12 to 17 year olds who now use the Internet, nearly two-thirds use it not just to access information but also to create it and share it—uploading their own digital creations, writing blogs, or maintaining personal Web pages” (Jerald 2009). YouTube stars, bloggers, digital articles, machinima creators, fan fiction writers, and online community members have made media novelties and a name for themselves on the internet.  The current school system is not setup to foster the creativity that is being produced in the virtual world. We think, "We went through the system and came out fine." However, we are not the same as our children. We don't learn and think in the same ways. System-thinking in a global society is a way of life now. Think about Reddit, Pinterest, Twitter or even online newspapers...members from all over the world are constantly chatting, collaborating, and thinking together. Children create digital media and share it for the entire world to see. But this isn't something we learn in school. This is something we learn when we wander into a game community, upload our digital art onto DeviantArt, or create machinima for YouTube.
Below: An example of machinima created by YouTube user ianpahute using the game Second Life.

Why AREN'T we learning these skills in school? Well, safety is obviously a very big reason. The world can be a very big and dangerous place for an insecure, unsure teenager. Every parent has shuddered at some of the YouTube videos young girls have made for the world to see or lamented over a boy that has hung himself because of cyberbullying. Therefore, schools naturally reject anything that is potentially dangerous. There are many other reasons, as well, which will be discussed in the Barriers to Implementation section.

Schools are missing out on the opportunity to educate kids about safety on the internet and the dangers of cyberbullying. Many feel this should be the parent's responsibility, like sex education, but many parents are also not tech-savvy. They might not KNOW what is on the internet or how to control it. I believe bringing technology and games into a structured classroom could really help kids learn those boundaries they will need for the next century. After all, how many of you are addicted to Twitter and Facebook? Maybe these are skills we need to start teaching kids.

The State of the Classroom

With so much diversity in a single nation, it comes as no surprise that we have many different learners in the same classroom. There is a diverse and complicated mix of students with different abilities, motivation, interests, and upbringing. While Johnny sits in the back of science class feeling lost and confused, Jill is feeling bored and belittled by the lack of challenges. Johnny may learn best with a hands-on experiment while Jill finds the traditional lecture suitable but not stimulating. One brave teacher not only has 23 other Jill’s and Johnny’s, but also must finish the day’s curriculum in 50 minutes and hope the students absorb enough to pass the required state and national test so she can keep her job. While standardized testing is currently the most efficient and easy method of evaluating student knowledge, it has also trapped learners into a system of isolated facts and events. It cannot accurately measure a student’s creativity, collaboration, interpersonal communication, innovative thinking, or system thinking (Rothman 2011). In the wake of standardized testing, the school philosophy has become ‘basic skills for all,’ whether they are too hard or too easy for the student. Rather than adapting the curriculum to the specific learner, we are forcing learners to adapt to the curriculum.

My next point is America's declining global position. It's not so much that our education achievement is declining, but it is very stagnant. That is, we're not keeping up with everyone's progress because we're not making much. Keep in mind when I say "achievement" I'm talking about test scores. Whether you believe test scores are an accurate measure of achievement is your own decision. Despite efforts to push advanced learning, the American school curriculum remains in the 19th century as the United States’ global position in STEM declines. While there was a two point gain in National Assessment of Educational Progress (NAEP) scores from 2009 to 2011 for 8th graders in science, 65% of those students are performing under or only at basic standards while a mere 2% meet advanced standards (Nation’s Report Card 2011). This is also reflected in the Program for International Student Assessment (PISA) scores as the United States scored lower than the OECD average in both math and just barely average in science (Fleischman et al. 2009). In fact, America’s 2009 mathematics score was not measurably different than the score in 2003. On the science literacy scale, in which levels 4, 5, and 6 represent higher order skills, only 29% of American students performed at levels 4 and above, meaning the majority of students display very basic science literacy (Fleischman et al. 2009).

Science, technology, engineering, and math are vital to the American economy. The Department of Commerce found that “technological innovation has been responsible for as much as 75 percent of the growth in the American economy since World War II,” and “the societal return on investment from publicly funded research and development are estimated to range from 20 percent to 67 percent” (Atkinson and Mayo 2010). STEM innovation also leads to job growth, competitive advantages, and higher standards of living. While the United States’ test scores have stayed stagnant, the STEM labor market has not. Technology’s rapid growth has steadily increased the demand for engineers and innovators. As America fails to produce enough domestic STEM talent, firms are forced to look overseas for foreign workers and, by 2002, 20% of STEM occupations were filled with foreign-born workers (Atkinson and Mayo 2010). However, “we may not be able to rely on high-skill foreign STEM talent too much longer, as other sending nations, like China and India, successfully grow their own tech economies and universities” (Atkinson and Mayo 2010).

This is not to say that STEM is the only thing that matters. I am a firm proponent of STEAM (A for arts), as well. Art, language, and creativity are not to be overlooked. Indeed, games actually have a lot to offer the arts and language. However, from an economist's perspective, I am concerned about the STEM labor market and its global implications. I see games as an opportunity to demystify science and math and show their real-world relevance. I will talk about why in the third section. However, first, we must define a game.

So, to sum things up, there are three mains reasons our educational tools need to evolve: